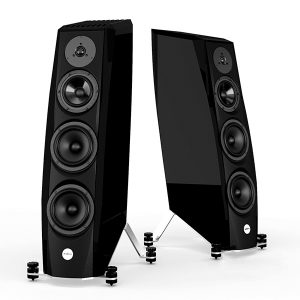 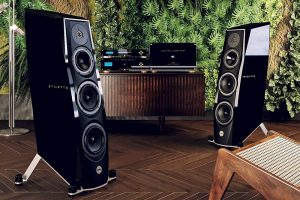 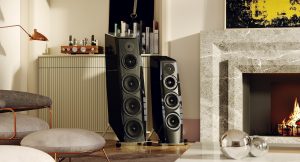 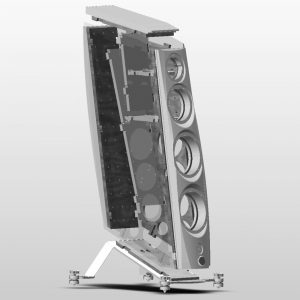 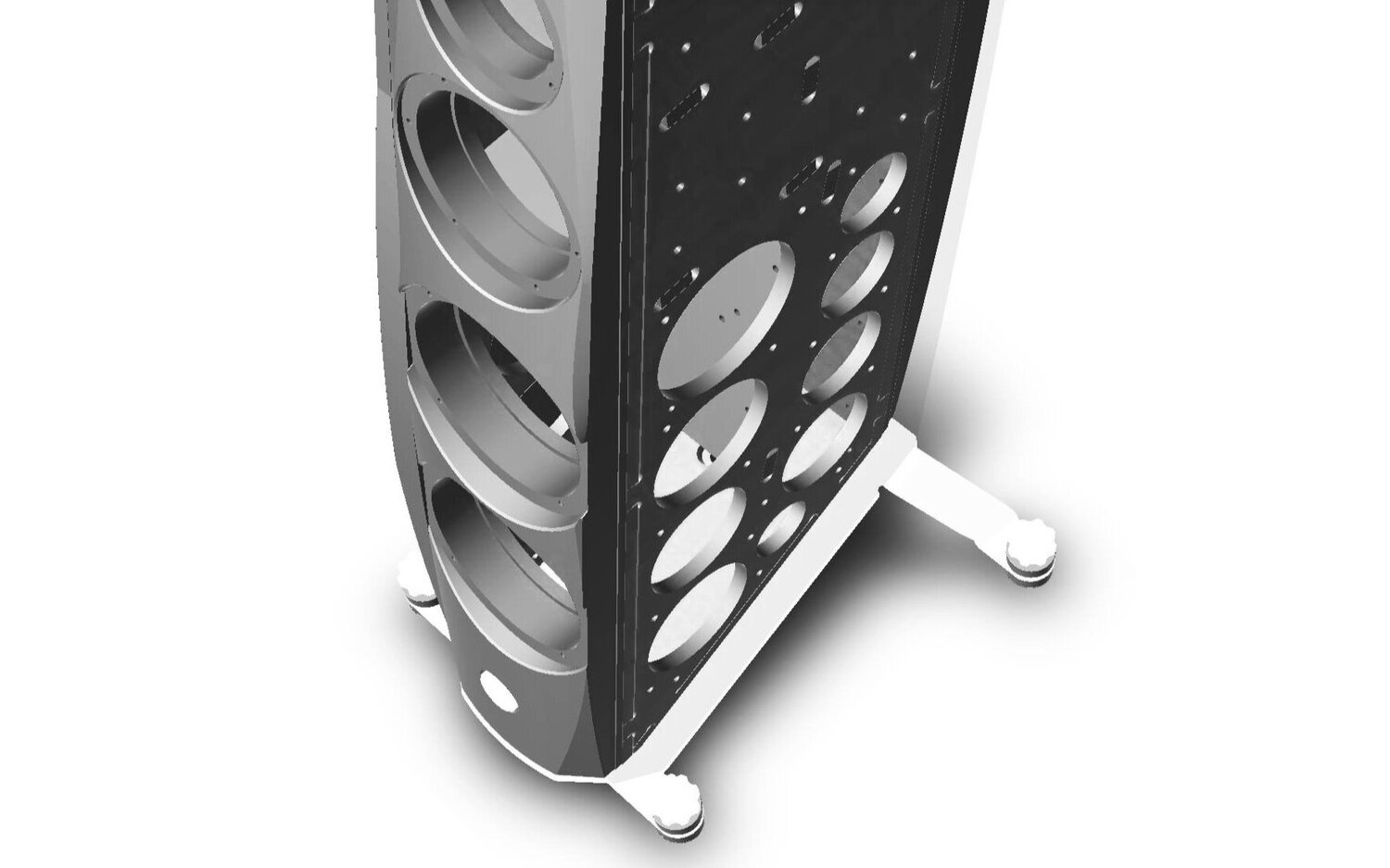 Instead of the traditional box, we built an elaborate chassis out of Maple / Birch multiply panels. Made of machined interlocking panels, the fit is so precise it could be assembled without adhesive. 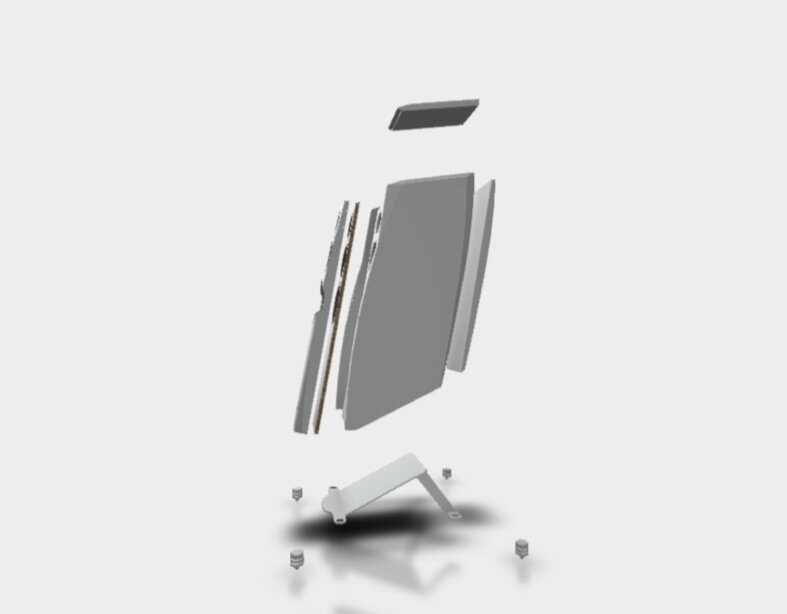 The vast majority of loudspeakers are built from a monolithic enclosure, with a single dominant resonance frequency. We took another route by attaching high mass finished panels to the subclasses with an elastomers adhesive that stays soft. 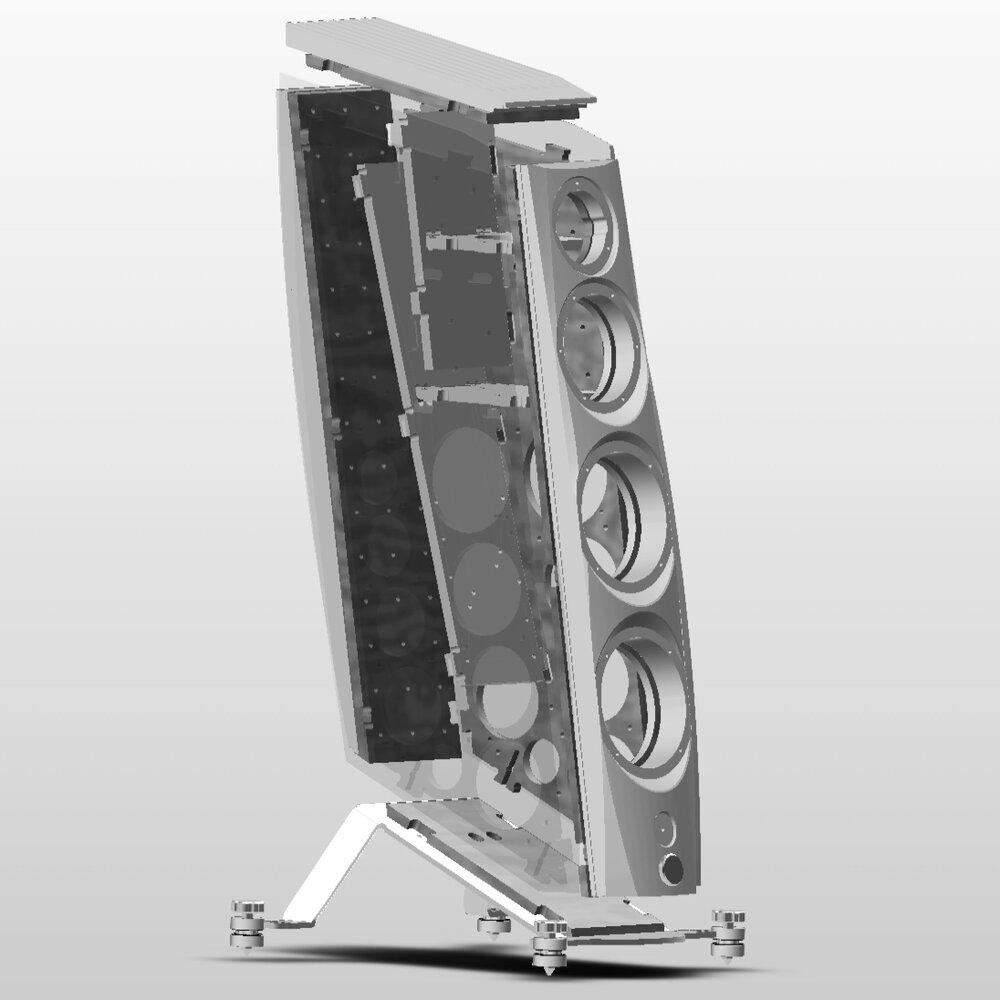 Four Years In The Making

Not something the average bean-counter like to hear, but we did not introduce Stiletto sooner because we designed it as a product that will exist for a long time. Thanks to our boutique-style operations, we build less, and we are content to supply few products to few discerning customers. 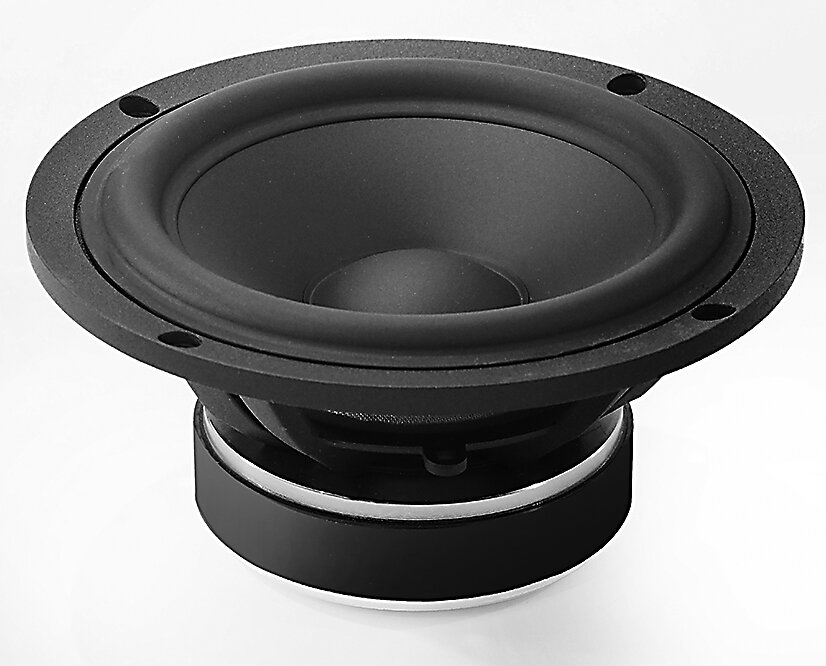 All The Bass, None Of The Boom 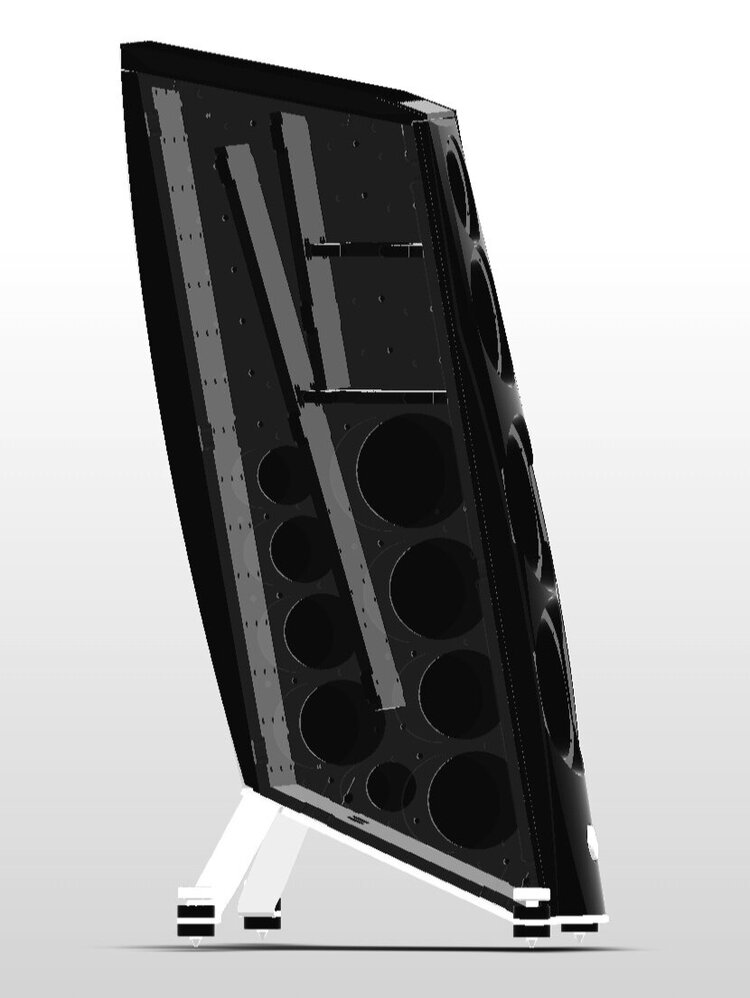 The vast majority of available loudspeakers are of the ported variety, also known as tuned enclosure, “bass reflex”, etc. This type of design is based on the helmholtz resonator, in which a closed cavity is open to the outside by means of a tuned “pipe” or tube. The volume of the cavity, length and cross section of the pipe will create a resonance at a certain frequency (the resonant frequency).

Transducers radiate as much energy from the front of the moving membrane as from the back of the membrane. But the back energy is out of phase with the front energy and trends to cancel the sound output with acoustic short-circuit. This is why most loudspeakers (with the exception of open baffle designs) are mounted in a box.

First, the back energy that would otherwise be lost is reversed and added to the energy of the front of the membrane. The reversal process delays the energy by one cycle or more, but makes the design more sensitive, because the two waves are added together.

Second, the availability of computer program made calculations very simple and straightforward and predictable.

One of the problems with Bass Reflex is the phase reversal process, which delays the vent output and blurs the definition of the sound wave. Another problem is Phase Delay — which is also caused by the phase reversal process, but depends on the design of the enclosure. Whether the listener objects or not to the delayed output is a matter of preference. In some situations (home cinema soundtracks for example), the delayed output is acceptable and perhaps desirable because it adds a sense of artificial scale to the sound.

In critical music listening, phase and group delays should always be avoided. This is the reason why Stiletto is based on a novel folded sealed transmission line design, where the back radiated energy is transformed into heat and dissipated by the complex enclosure.

As seen in the cutaway illustration, the low frequency transducers (bottom two drivers) are mounted in a two-folds sub-enclosure. This sub-enclosure is entirely filled with Dacron fibers, which creates acoustic friction and transforms the energy into heat. The result is that only the energy coming form the front of the two transducers is kept. No phase reversal, no delays, just highly resolved low frequencies.

Another interesting aspect, unique to Stiletto, is the ultra damped, low Q design. The air volume in the folded line is large enough that the air trapped in the enclosure has no “spring effect” therefore, the amplifier entirely controls the movement of of the membranes, contributing to the extraordinary resolution of the systemm. 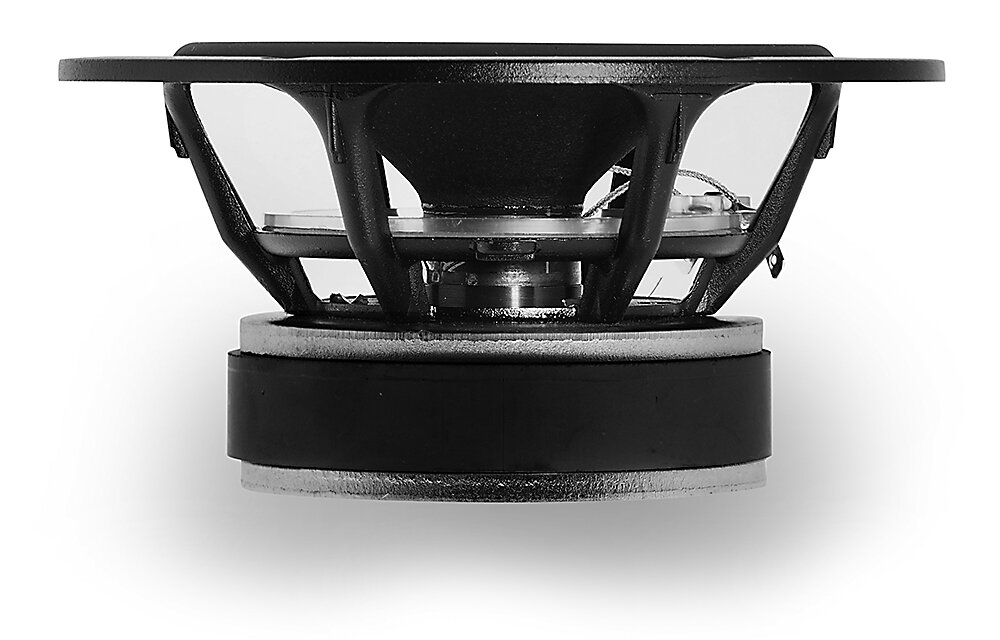 Most of the musical spectrum is reproduced by a single, amplifier-coupled drive unit.

Stiletto is based on a quasi full range driver, reproducing almost 7 octaves of sound, with no delay or crossover related phase issues.

With a membrane of hand coated treated paper, this driver has incredibly good self damping characteristics, from 40 Hz to 4000 Hz, allowing a direct connection to the amplifier terminal with no Inductor or Capacitor in the signal path.

The result is incredibly smooth and pure sound. It can, by itself reproduce all of the vocal frequencies, and unlike other loudspeakers, vocals are not diced between 2 or 3 separate transducers. 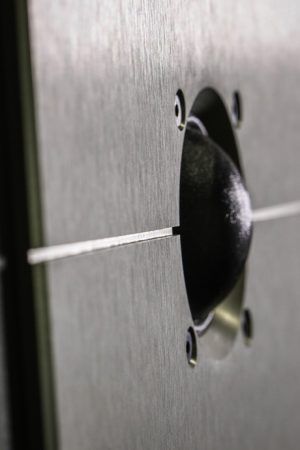 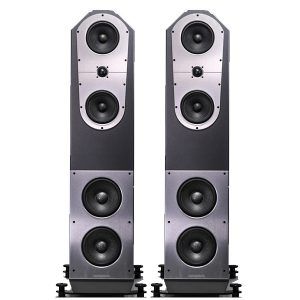 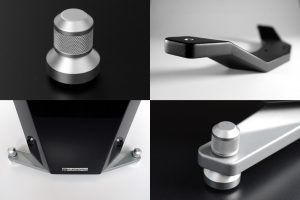 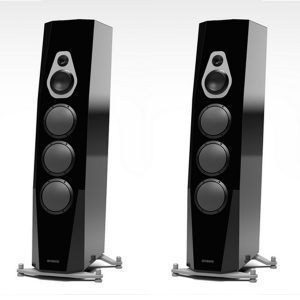 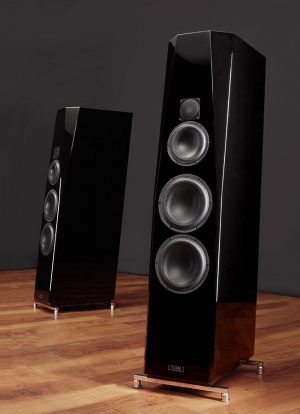 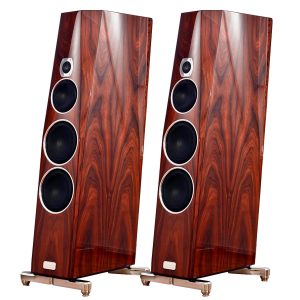 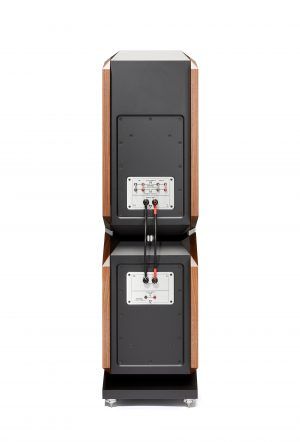 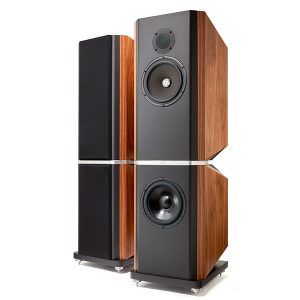